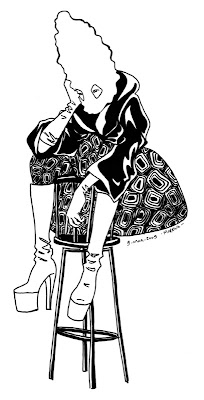 Here I am, after living in Montreal for 3 years and then in Vancouver for 10 months, I have moved once again. This time im in Toronto, this time for work. Not for love like last time, but hopefully Kym will come here as soon as there will be the chance. Till then I'm here on my own, but I have a few good friends here already, that helped me to get introduced to the town and things.

Little Italy might not be as good as in Montreal and Vancouver, and Canada here looks less Canada and more America, while some other things stay the same, just with new people...
I didn't waste too much time. I found Dr Sketchy and some other arty entertainment... but we go with one thing at the time...
I've already talked about this "Dr Sketchy" many times over in my blog, and already spoke about the Cameron House about a year ago. But this time I could go to the theatre in the back of the pub, and enjoy the drawing session it with my friend Adele.
The model was dressing something indescribable, but definitely funny. Adele wanted to steal the pink disguise.
The only a negative thing was in the middle of the show. Because of a disturbing scary mask on a mermaid. I'm really impressionable.
The Cameron House, in the front pub, was exposing Buttons painted and with feathers, hanged on the walls.
Well, this is Toronto. People are slightly more crazy, I guess.
It will be fun. 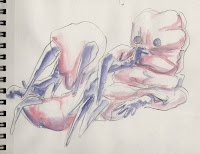 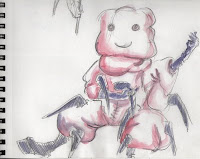